Great comedy in May and June in Tiverton

It’s almost Mid April already – but it’s an exciting time at Comedy Hall. So much going on and we’re talking to some great names in comedy, especially for our run in to Xmas. Keep an eye open for Winter news about Jeremy Hardy and Mark Steele in particular.

So if you love comedy then please support us. Here’s what’s coming up in May and June:

There are less than 20 tickets left for Phil’s tour show. These are currently only available here: 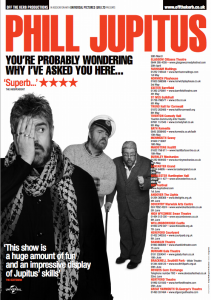 The many heats are almost over and we have heat winners coming to Tiverton for the awards finals. These could be the big names of the future and it’s your chance to see them first. So far we’ll be welcoming: 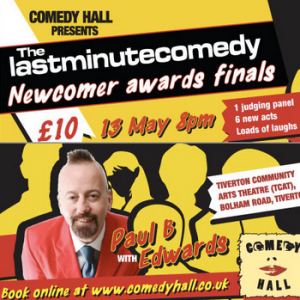 Jeremy Clarkson says everyone should own an Alfa Romeo once in their life. Well, I say the same is true about seeing Bob Mills. Bob is a undeniably a legend in British comedy, and you’ll know him from In Bed With Medinner, Win Lose or Draw, Radio 4 News Quiz, Fighting Talk and much more. Come and spend an evening at An audience with Bob Mills to appreciate the comedy genius first-hand. 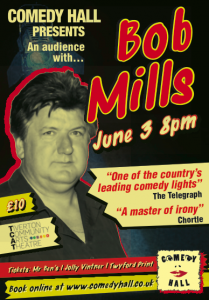