In a couple of weeks it will be June. Comedy Hall is gearing up for the sun, but more importantly for the long-awaited arrival of Bob Mills.

It’s hard to explain my excitement that he’s finally coming to Devon. And so as not to over-do it, I’ve decided to let you read an article – in whole – from Metro about Bob. I should point out that this preview was for one of Bob’s shows in Birmingham – and tickets were £17. In Tiverton you get Bob for a tenner. If you live in Exeter, Barnstaple or Bristol, it’s well worth the petrol.

“For a while, Bob Mills was the nearly man of comedy. Many people will know him from his stint hosting Win, Lose Or Draw on ITV, the chosen viewing of students and the unemployed. The more comedy-savvy punter will know him better for In Bed With Medinner, his 1990s show that garnered him a cult following and was aimed at the late-night crowd.

From there, though, Mills struggled to rise to the next level. He’s since said that the breaking point was losing the job of hosting You’ve Been Framed! to Lisa Riley, leaving Mills to consider whether the rest of his career would just be vying with Vernon Kay for some rubbish game show or other.

And so Mills decided enough was enough and became a writer. He penned the hugely underrated Michael Barrymore ITV entertainment satire Bob Martin, the morose hangman film Pierrepoint and even an episode of Channel 4′s Shameless.

It was a clever move, repositioning Mills as a writer rather than a presenter, and putting him back on the respectable side of popular culture. He hasn’t given up the gag-telling though; Mills is still an excellent stand-up, something he’s been practising since the mid-1980s. Sarcastic and shrewd, this is a rare trip, so make a date.”

Get your tickets now – you won’t be disappointed. 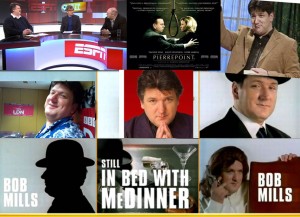 Bob Mills – seen here on BBC Fighting Talk, Win Lose or Draw, his movie Pierrepoint, In Bed With Medinner, and on TV with Ian Stone and Dara Obriain.